You are here:Home / Mario Ruocco

The beginnings – The commercial history of Mario Ruocco begins on the island of Capri in the 40s and unfortunately coincides with the very difficult years of the Second World War, during which the whole world is going through a very hard time and austere that requires all those who find themselves involved Major efforts and sacrifices unimaginable. 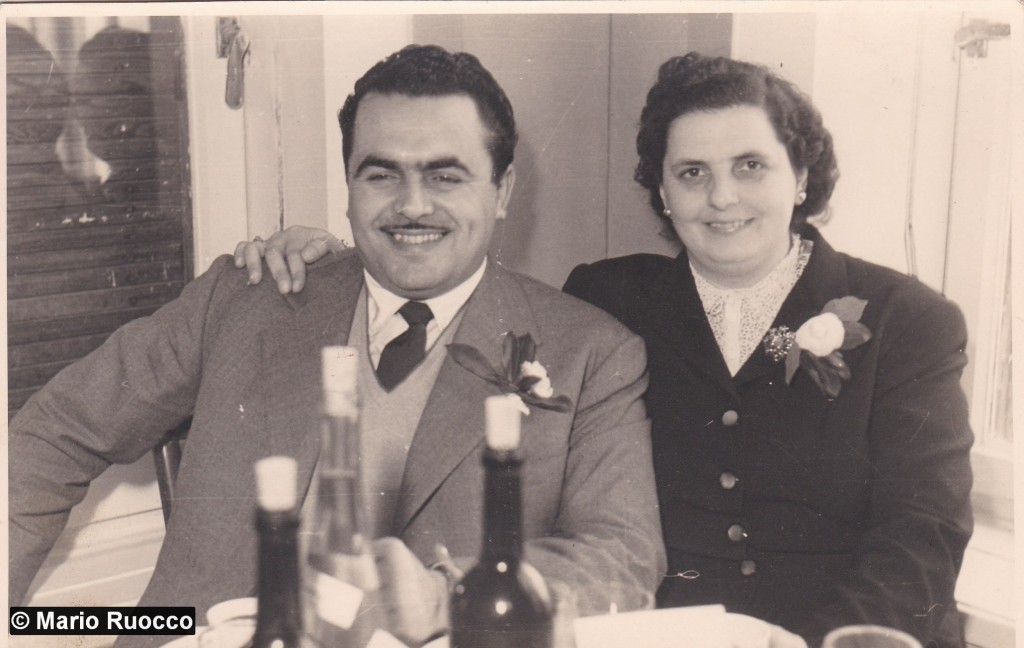 Mario Ruocco and Regina De Angelis in the 50s

Indeed for it is in 1945 with the liberation war still going on in Italy that a young native of Capri’s Marina Grande seaside village, Mario Ruocco and his wife Regina De Angelis, opened a small shop with the same name near the Piazza Umberto I, the famous Piazzetta. And more precisely in Via Le Botteghe. In front where there was once a former hotel and restaurant Gaudeamus. Very popular in the 50s and 60s in Capri. 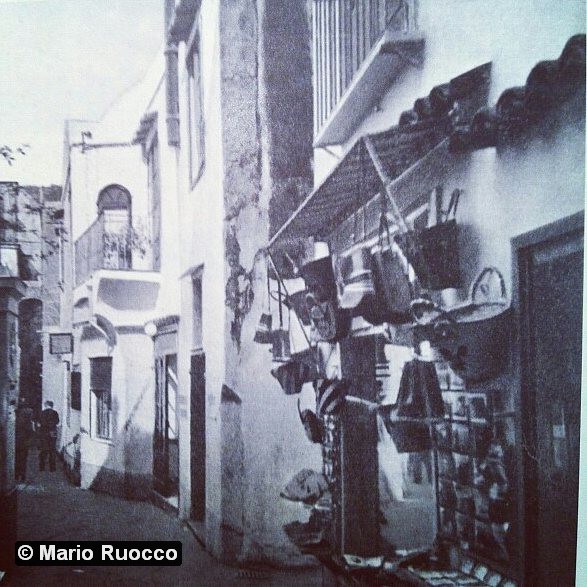 The activity of Mario Ruocco initially will address in particular the sale of gift items, such as wooden handicrafts, the objects in general and other accessories. Although in reality in those years the island of Capri was devoted almost exclusively to fishing, agriculture, production of coral and the first forms of crafts. And hotels and restaurants were really very few. Only a few inns and family-run trattoria. 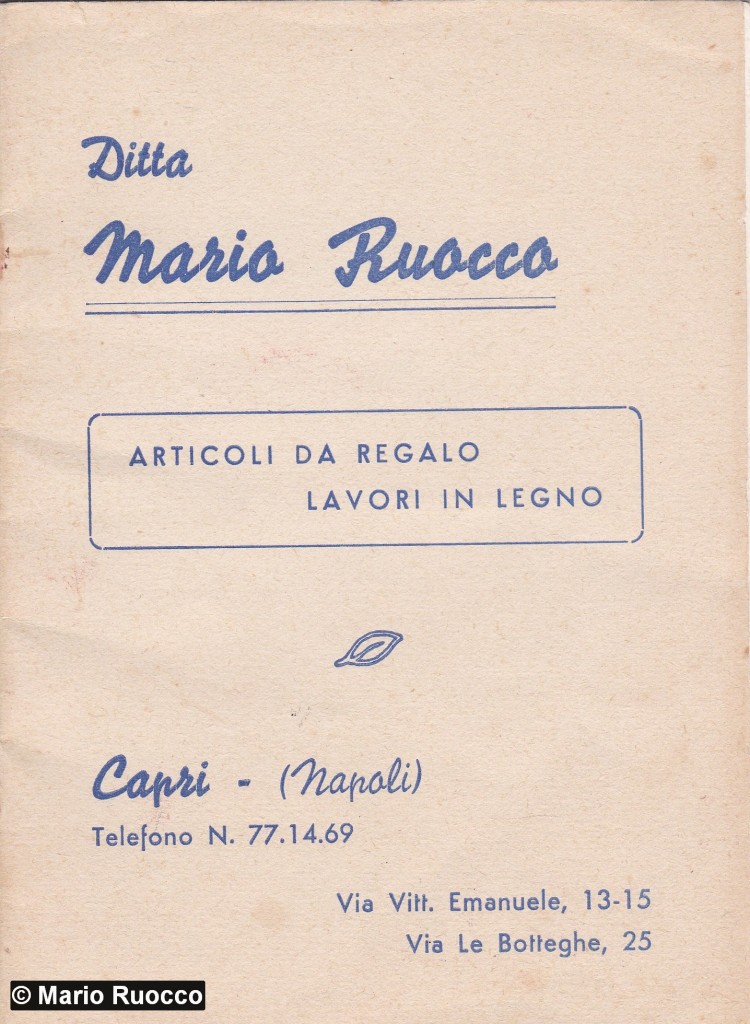 Cover of an advertising catalog of Mario Ruocco in the 50s 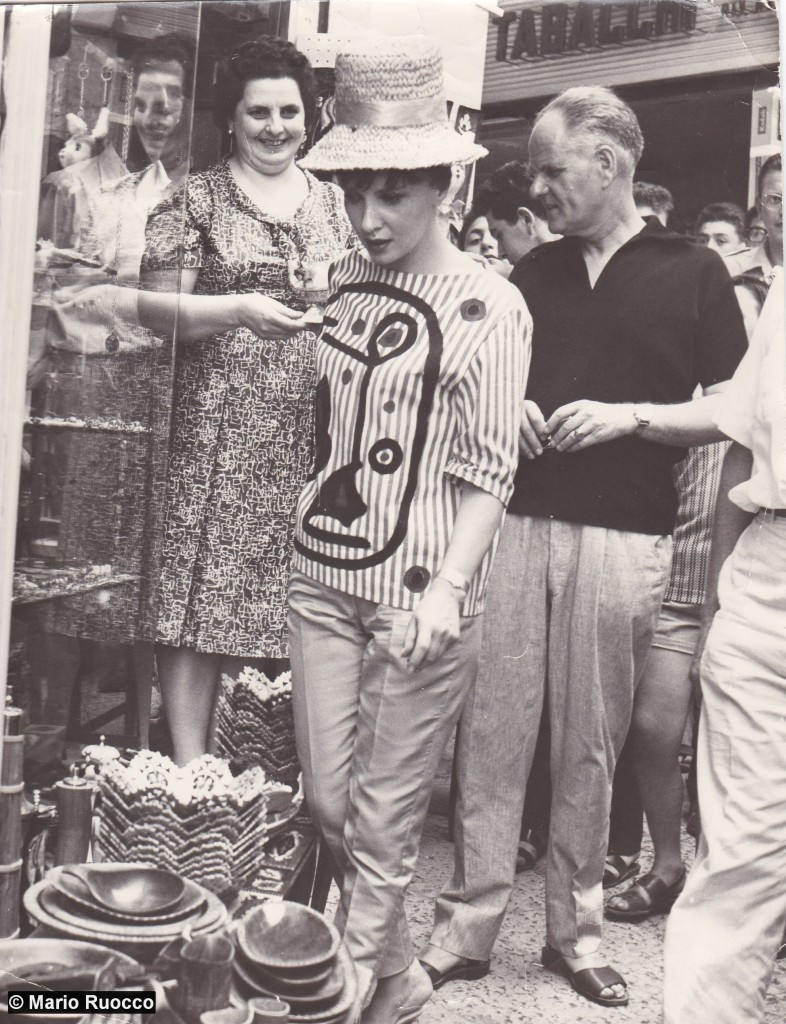 All were fascinated by the beauty and sweet at the same time harsh island and the kindness of its inhabitants. But above all in search of artistic inspiration that only Capri knew transmit them with its magical atmosphere. As well as the transgression, because since ancient times, the island was a privileged place for extravagance and excesses of all kinds. Roman times onwards.

The beginning of the golden age of the island of Capri. Where the myth began.

The breakthrough year – But it is in another room located in Via Vittorio Emanuele in 1947 (in what later became the historic headquarters until 1999) following a series of insights and trade agreements with new suppliers, with the first proposals of articles of watchmaking and later of gold, silver and jewelry, that the activity of the company Mario Ruocco is gaining increasing importance. 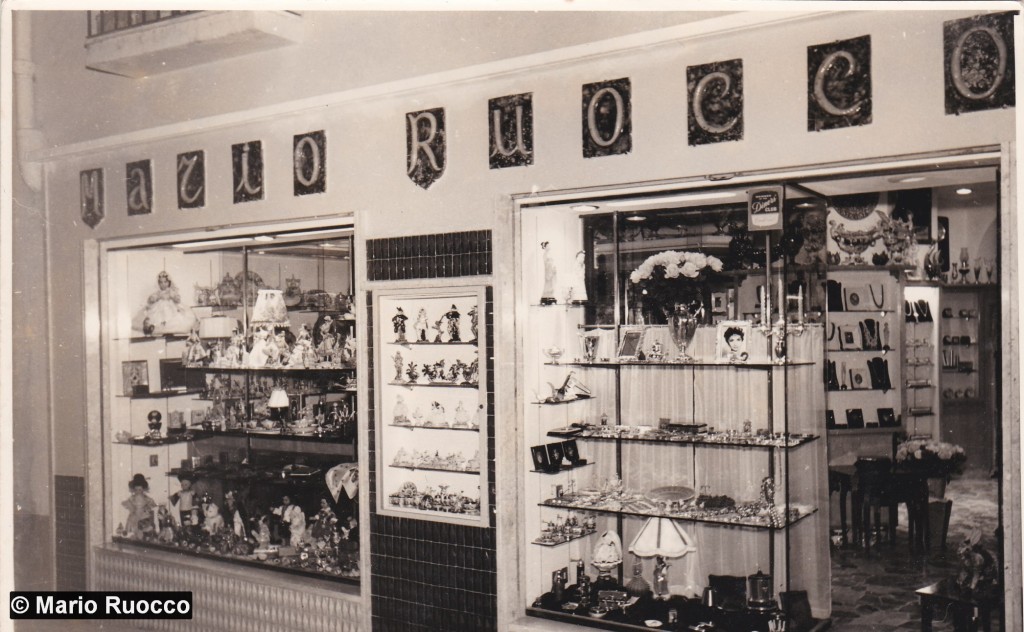 In addition, the jewelery and watches will be accompanied by the department with toys, whose shop windows were a dream for children of all ages and have enchanted generations of adolescents. All this to make Mario Ruocco a real reference point for the inhabitants of the island of Capri and beyond. Even the growing number of day trippers and holidaymakers, both Italian and foreign, following the evolution of the slow but relentless economic boom postwar Italian 50s and 60s in a Capri transformed from exclusive destination for a select few to island glamor par excellence, appreciate the assortment and proposals along with the professionalism and courtesy of Mario Ruocco and his wife Regina. And meanwhile, it also opens another store near the Piazzetta, always named Mario Ruocco precisely, in Via Roma. A road that was beginning to show the first interesting commercial developments. And then where it will rise a bus or taxi and Capri. 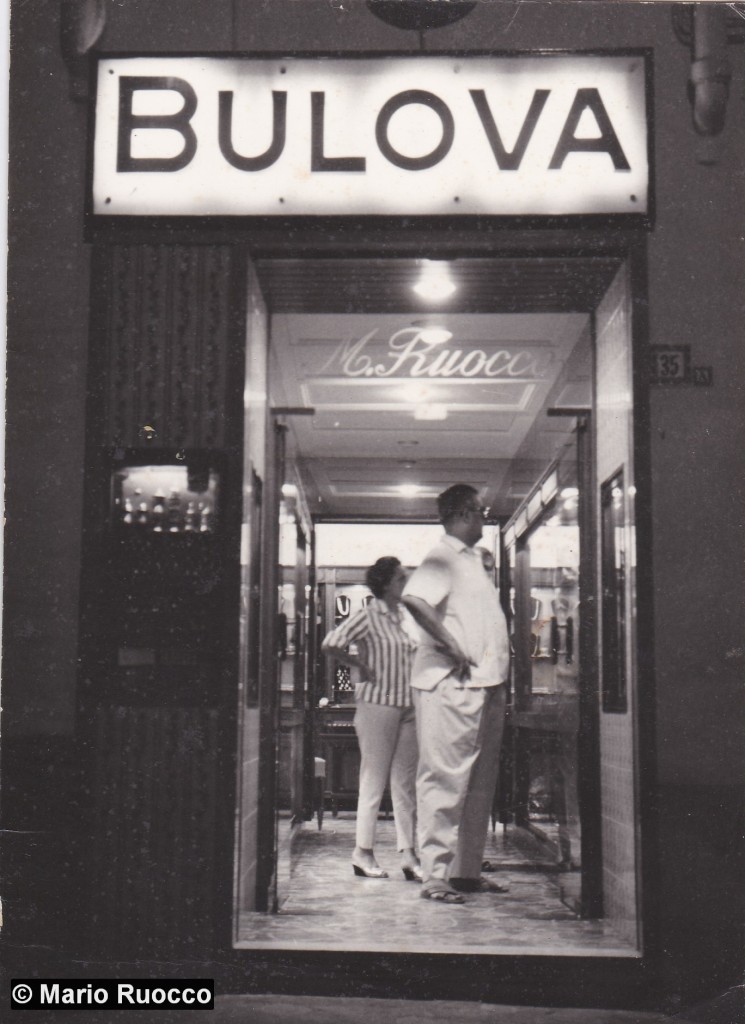 Over the years, even after the untimely death of its founder, the activity of Mario Ruocco continued the same with various conditions to be part of the rest of the family, with the ever-present wife Regina and the second generation, represented by his three sons Carmine, Costanzo and Silvia.

Lastly, after the latest transfer in 1999 from the historic site to another place (located in Via Parroco Roberto Canale n. 15), always in the historic center of Capri and where Mario Ruocco’s business will remain open until the final closing in 2015. 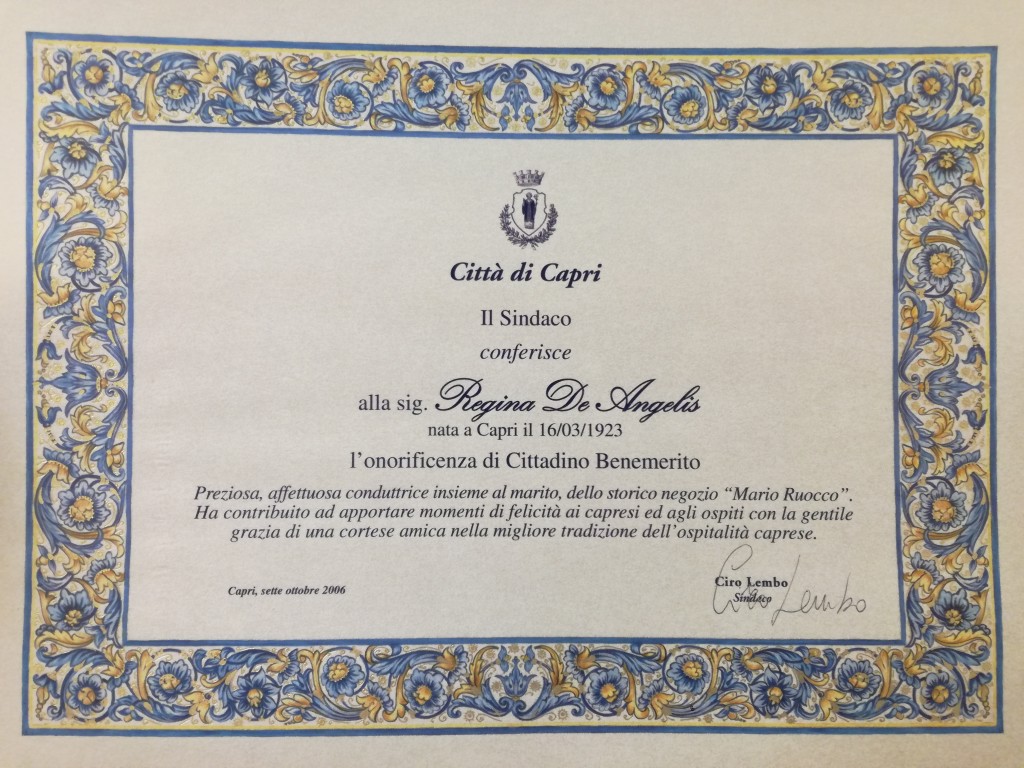 Precious, affectionate conductor with the husband, of the historic store “Mario Ruocco”. He has contributed to bringing happiness to the Capri inhabitants and guests with the kind grace of a courteous friend in the best tradition of Capri’s hospitality.

An institution – In fact, Mario Ruocco can be regarded as a kind of pioneer of trade, in particular of clocks on the island of Capri. Since it was the first to open watchmaker and propose items as watches, pocket watches, wall clocks, alarm clocks and other items similar to its customers. The first beautiful watches with manual winding (who should be given the position constantly) or the automatic watches (with the movement of the wrist) and then quartz watches. Just to name a few. 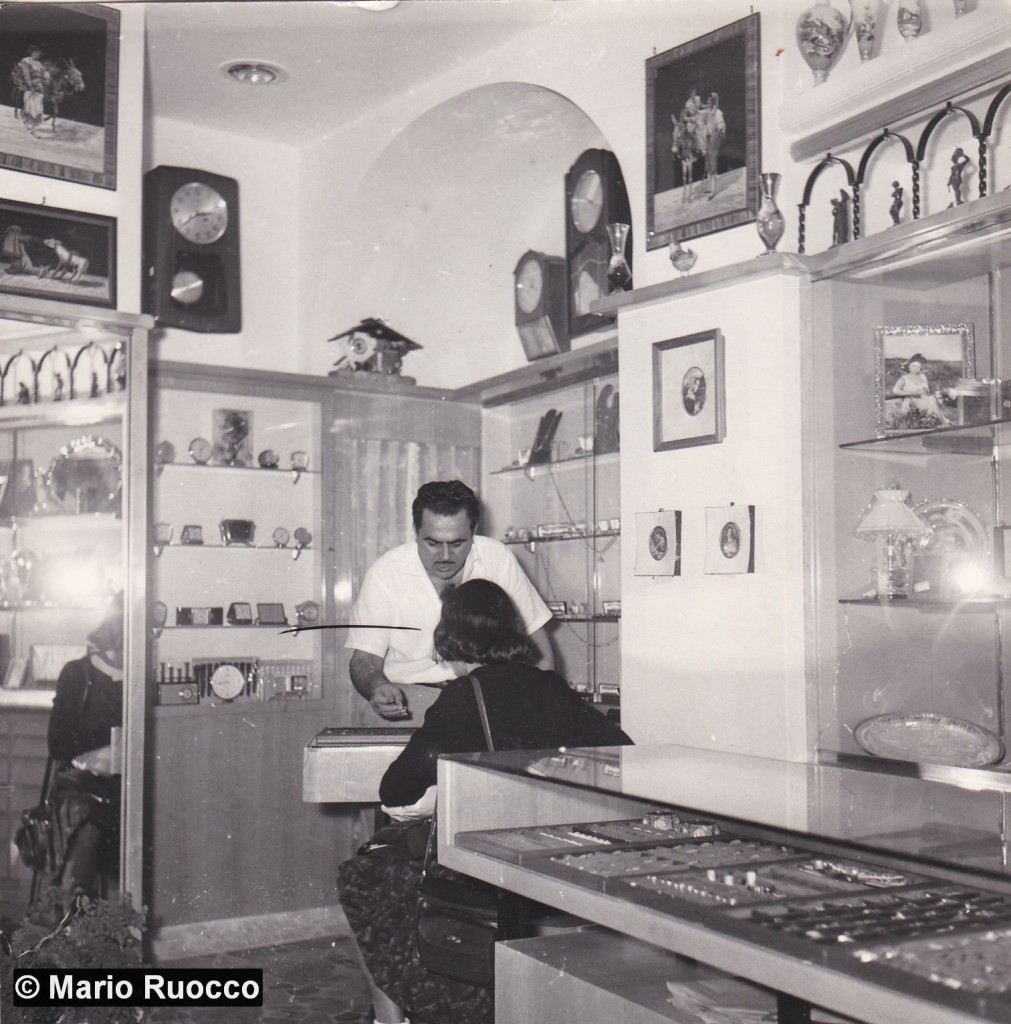 Mario Ruocco in his shop with a customer in the 50s

The present days – Today, another Mario Ruocco, son of Carmine, the first grandson of the namesake founder and member of the third generation, continues also with humility, modesty and respect the family business in the field of watches and jewelery, running their own shop in Via Madonna delle Grazie n. 5 in the historic center of Capri island with the same passion and politeness of his grandfather Mario and his grandmother Regina. Along with the historic family brand, the new brand “Capri Kronos”. And in particular by providing more advice and tips to its customers, with professionalism and competence. But above all keeping unchanged those sacrosanct values ​​of integrity, honesty and transparency, that his grandfather Mario and his grandmother Regina sent him with their humble example of hard workers. As in the best traditions commercial. More than a job, a real family tradition.

This is still Mario Ruocco in Capri. A name that is part of the history of this island for more than 70 years. A fitting tribute to the memory of my grandfather Mario, for whom it proudly name. Not to forget the importance of their roots.

Mario Ruocco
– Capri doc
– Grandson and son of art
– Member of a historic family of goldsmiths, jewelers and watchmakers since 1947